Welcome to the website of the NMRRC in Traverse City, Michigan.  This year, we are celebrating the 10th year anniversary of the Northern Michigan RailRoad Club.

Each year we have been producing a special limited edition club car that we feature on our home page.  After extensive research of prototypical cars that ran on the rails in Michigan, a selection is made.  These are rare cars with the graphics being done by Buffalo Creek Graphics and applied to Weaver boxcars.  For 2014 the run is of a two-car set of refrigerated beer cars.  Please note:  Both Bosch Beer reefers for 2014 are now sold out.  Also all of the 2013 boxcars are now sold out as well.

To view the cars we have produced in the past see: Club Car Info. 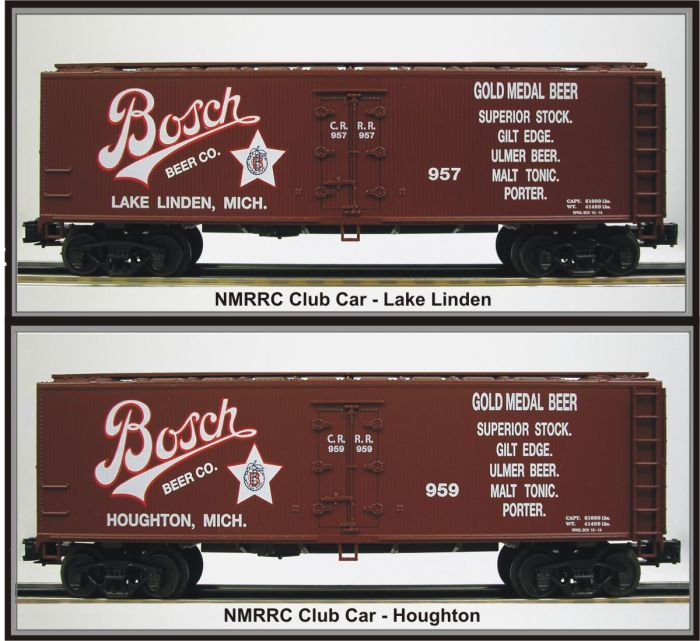 PROTOTYPE CAR
We have been doing research on Northern Michigan brewery cars for about the last five years. Our goal was to find a Michigan brewery that actually had a real “beer” car and our only requirement was that the brewery existed both before and after the prohibition years. Our choice, the Bosch Brewing Company began brewing beer in 1874 and closed the last of its facilities in 1973.

In 1899 the Copper Range Railroad purchased Insulated Refrigerator Cars from the Pullman Company. There were seven cars in this series and the road numbers were 140 and 954 through 959. These cars were classic “Turn of Century” freight cars. They were 60,000 pound capacity; were either 33’ or 34’in length and of wooden construction with truss rods and arch-bar trucks. The carswere painted Reddish Brown and had White lettering.

We know that the Copper Range Railroad had ownership of the car, but we do not know who painted the actual car. The car could have been painted by either the brewery or the railroad and made a great advertisement car for Bosch Brewing Company. The Copper Range Railroad did have another beer advertisement car. It was for the Scheuermann Brewery’s “Rheingold” brand; however the brewery did not survive after the prohibition years.

2014 NMRRC CLUB CAR
We were only able to obtain a photo of the “957” car. However we decided to do a two car set; the ‘957” car for the original “LAKE LINDEN” brewery and the “959” car for the “HOUGHTON” brewery. The car sides and roof will be painted Reddish Brown and have prototypically accurate White lettering and “star” graphics.

Since our club membership does not collect or operate “Turn of Century” freight cars, we chose this year to go with a Steam Era Classic 40’ Wood-Side Composite Refrigeration Car made by Weaver Models. The Weaver car body has molded doors, ladders and steel ribbed ends. Because of the ribbed ends we were unable to have the large “Bosch” name logo on the car ends.