Keep your eye on this web page for a link to a pre-order form and a full page on our Club Car Info page. The cars will be Rheingold Brewery from the Upper Peninsula of Michigan and Short’s Brewery of Bellaire, Michigan and Elk Rapids, Michigan. Both cars will be in 2 road numbers….prices have yet to be determined based on our costs. These wood-sided plug door refrigerator boxcars are being made for us by MTH in their beautiful Premier Series. 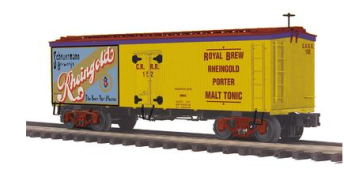 The Northern Michigan RailRoad Club is an all gauge railroad club. We have been meeting in the Grand Traverse, Michigan area for a number of years now bringing model train displays to the public to enjoy at several venues.

If you are a model train enthusiast, you are cordially invited to join us in the pursuit of model railroading fun and fellowship.

The NMRRC meets the first Saturday of each month in Mapleton at the Peninsula Market on the Old Mission Peninsula The regular business meeting is at 10:00 am followed by a work and running session at noon until 2 pm. Other work sessions will be on selected days to be announced.

Members of the NMRRC have a vast wealth of knowledge from the collecting of antique toy trains to the very latest digital technologies used for running trains that is available today. We operate and build modular layouts in G, O,  S, HO, and N gauge. These layouts are worked on and run at our clubhouse in Mapleton. 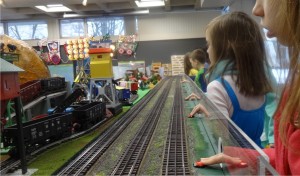 NMRRC Public Activity
Each year, the NMRRC has a featured exhibit at the Festival of Trains which will be held at the First Christian Church of Traverse City during the Christmas holidays. It is well advertised in the local newspapers as well as on television. Previously it was held at the former History Center. The new venue will offer more space and better parking.

An additional event is held at the Alden Depot in the village of Alden. This event usually takes place starting the second weekend of August through Labor Day on Saturday and Sundays only. One room of the depot is our traveling display and another room holds Alden’s permanent train display

Train members often attend area train shows sharing both rides and fellowship Several members of the NMRRC are also members of national tram organizations like the TCA (Train Collectors Association). They often attend semi-annual meets at York. PA as well as other train events throughout the state of Michigan.

Officers
Club elections are held in each October.